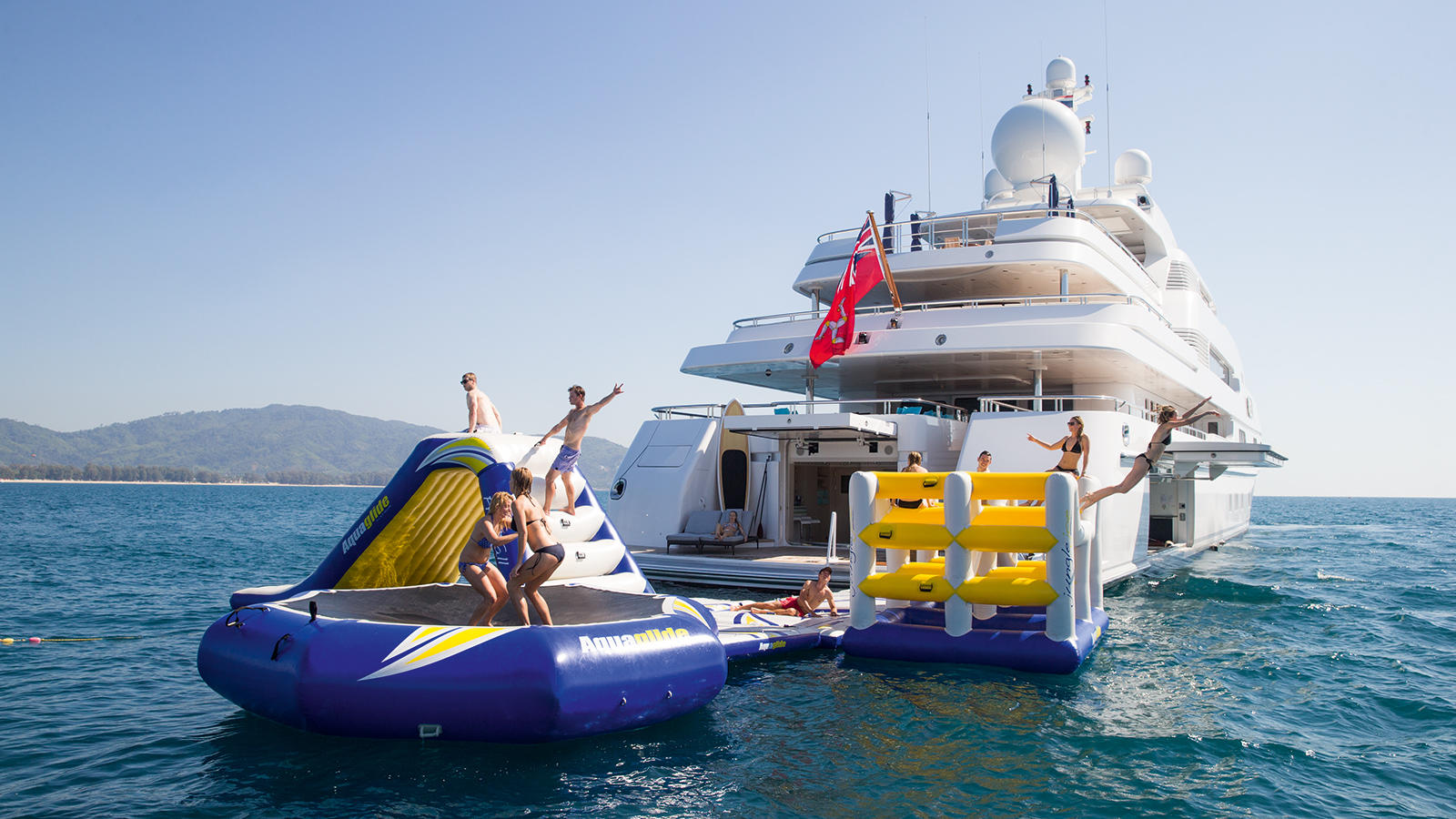 Inside The Best Superyacht Toy Garages in the World

Superyacht toy garages can hold all types of water sports gear, from Jet Skis and submarines to motorbikes and off-roaders. We round up the best garages on board superyachts, starting with the 136 metre Flying Fox…

A cavernous garage on board Lürssen’s Flying Fox holds five tenders and a treasure trove of toys, from flyboards and foiling sufboards to Seabobs and windsurfs. There’s also a dedicated kite surf store and a dive centre that will make enthusiasts swoon. Here guests will find every bit of kit imaginable, from advanced nitrox mixing systems to full face masks and underwater scooters for those looking to explore the underwater world. Diving not your cup of tea? There’s a submarine on board that can take you down to the depths instead.

Sitting on the top deck of the 66 metre shadow catamaran Hodor, you’ll find a Nautique ski boat, a custom Metal Shark landing craft, and a 388 Skater powerboat with with a top speed of 165 knots. But that’s not all – below there’s a whole garage full of goodies. Hodor‘s toy garage houses nine Jet Skis, two Yamaha ATVs, four Yamaha TW200 trail motorcycles and a three-person submarine.

The garage on the award-winning 83.5 metre Feadship Savannah opens up her smooth flank to reveal a wealth of toys. In addition to her four tenders, guests will find two Yamaha stand-up Jet Skis, two Seadoo Spark Jet Skis, two Jet Surfs, four seabobs, a Laser sailing dinghy, four mountain bikes, an inflatable slide, and the list goes on. The garage also creates a sweeping platform from which to launch them.

With a Snuba, Jet Surf, and inflatable slide among her many toys, it’s easy to see why the 58 metre Benetti superyacht Illusion V is a charter favorite. As well as an inflatable dock for all her toys, Illusion V also boasts a Jetovator and a Flyboard, for soaring out of the water and floating serenely above it, respectively.

The captain calls the toy garage of this 107.4 metre Kleven superyacht a man cave and it’s no wonder why. This toy box is home to Harley-Davidsons, Ducatis, KTM off-roaders and all-terrain vehicles, ideal for on-shore exploration.

The toy box on this 64.5 metre Benetti boasts a pick and mix selection of treats including Jet Skis, wakeboards and scuba kit. As if that wasn’t enough there’s also gear for kiteboarding, kneeboarding, deep-sea fishing, an even golfing thanks to a Teeit Golf machine on sun deck.

Hate waiting for your turn on the Jet Ski? The 96 metre Blohm & Voss superyacht Palladium solves this problem with a tender garage big enough to store eight personal watercraft – enough for every guest on board should they be willing to share. Luckily she also has quarters for 34 crew so getting them out on the water takes no time at all either.

Another popular charter yacht, 69 metre Saluzi packs all sorts of novelties, from Sea Bobs and waterskis for speedsters to paddleboards, glass-bottom kayaks, an on-water pool and a dive centre for guests looking for a more sedate experience.

Spend hours on the water with Titania’s inflatable climbing frame, Kawasaki stand up Jet Skis, flyboard, and 12.7 metre inflatable slide. Plus, two qualified Jet Ski instructors are on hand to show you the ropes. Launched in 2006 with a refit in 2018, the 72 metre Titania is in shipshape for the coming charter season. She is currently offered for charter through Burgess.